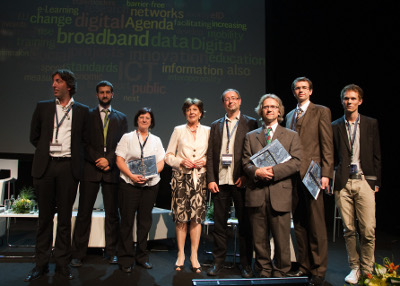 On the 2nd and 3rd of March in Hilversum (Netherlands) first hackaton organized by Europeana took place. Hackaton is an informal workshop to show (in this case) possibilities of Europeana API usage. During two days developers had opportunity to create an interesting projects – sketches, prototypes or even complete applications. Workshop was held in the Netherlands Institute for Sound and Vision (Beeld en Geluid).

Europeana OpenSearch API allows to build applications that can search and display Europeana collections metadata. You can search for objects and filter search results using any metadata fields. For each element from search result you can get full metadata record in a ESE format.

Projects focused on such themes as CMS integration, data visualization or web feeds. Marcin Mielnicki from PSNC build a service that provides Media RSS feed generated from search query. It can be used to present search results using, for example, Coolisis media browser. The meeting ended with a presentation of ideas and prototypes and the best of them were awarded. Outcomes are for for non-commercial usage and will be promoted by Europeana.

Here are photos from the meeting.