dLibra 5.0 is still under intensive development. One of the most important things, that we are working on, is the user interface of the dLibra Readers Application. By changing old mechanism and adding new features, with extensive use of Web 2.0 approach, we are trying to improve user experience, of this most often used part of the dLibra system.
Recently we have modified the search mechanism and interface, in which we have previously implemented some important changes, like thumbnails in search results view. Currently we have also changed mechanism of selecting ambiguous synonyms values and filtering by collections. On the attached screen we can see the current result. 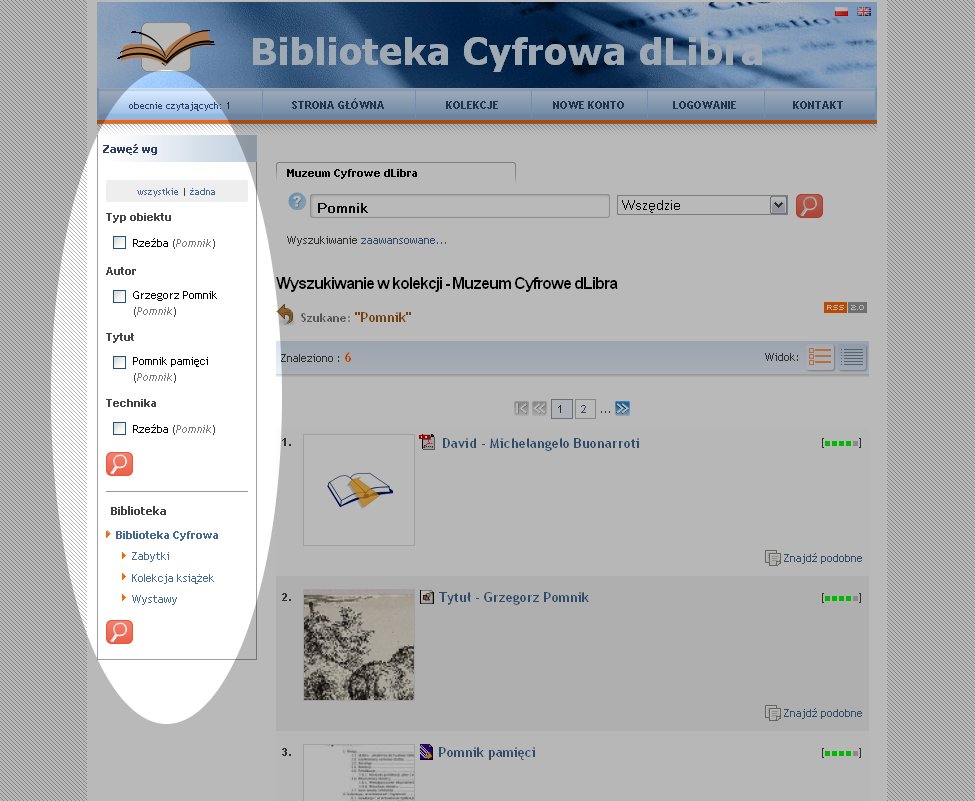 Selection of the ambiguous values is now visible on the left side of the search results page. For those, who have already used digital library based on the dLibra system, changes of values presentation can be noticeable; interface is also more friendly and intuitive. Other change allows a selection of more than one collection by which search results are narrowed.

We have also prepared some changes in content view interface. When viewing content on the bottom of the screen there is a new functional toolbar, in which there will be possibility to use few options from the user profile. 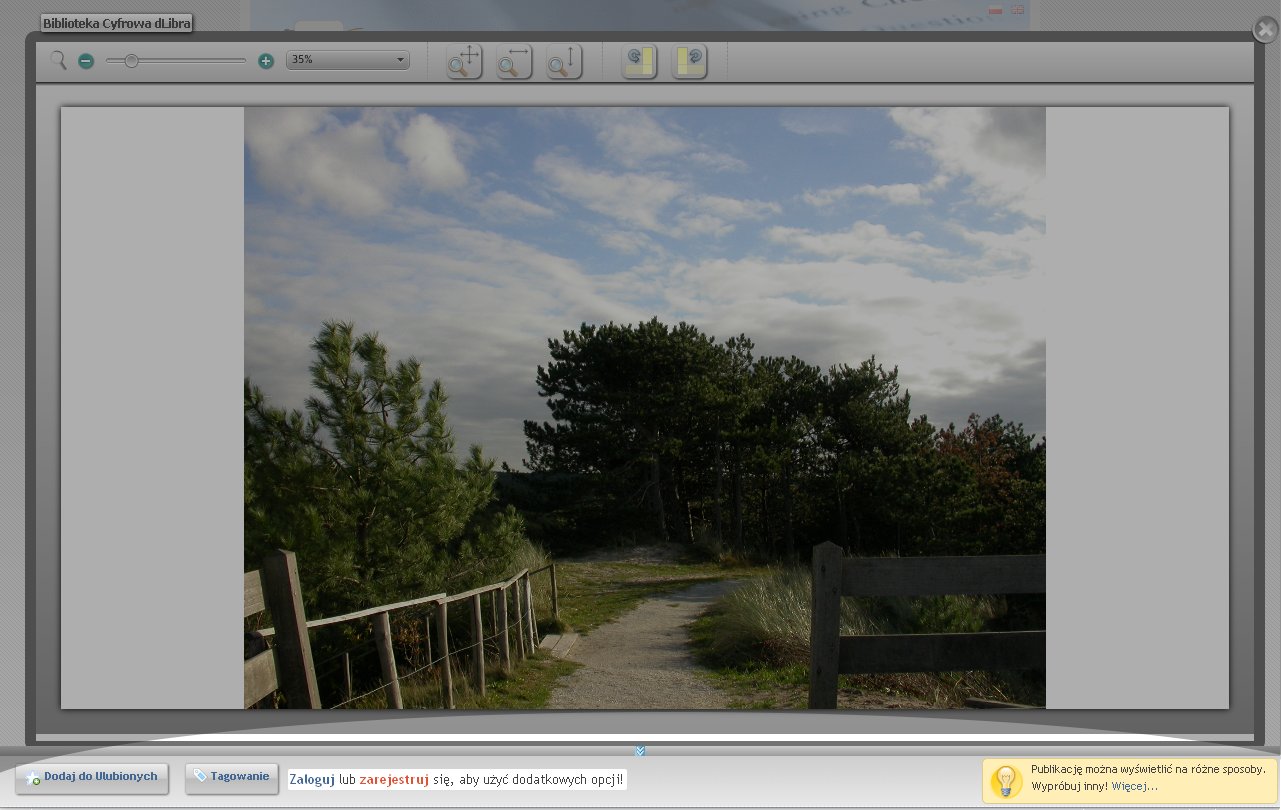 In relation to the previous version of dLibra there is also a change in view handlers selection – now each data format will have its default view handler and option of changing it to another (if possible) will be presented in the new toolbar.

The last thing, which is worth to mentioning, is some improvements to new publication creation mechanism in WWW application of the dLibra. New functionality was presented on dLibra Users Meeting at the PBC 2009 conference. Partly thanks to our users voices we have decided, before the dLibra 5.0 release, to prepare some improvements. One of attached screenshots shows the new interface of second step of publication creator. 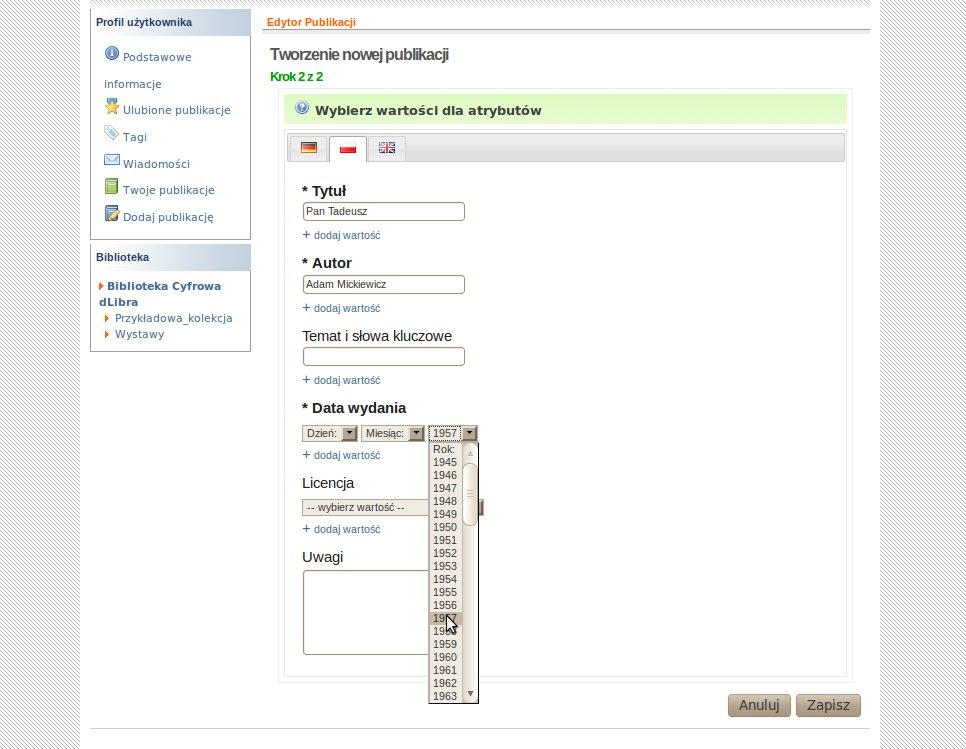 On a web page of the National Audiovisual Institute there can be found interesting report on digitalization of Polish culture. This initiative is supported by the Competence Centres, cited by the Ministry of Culture in 2009.
Report is divided into three parts:

Problems of this complicated process, tasks as well as challenges of the subject are presented by experts in the matter of archives and digitalization. The subject is also presented from other perspectives – legal, organizational and financial by experts from National Library, National Film Archive, National Digital Archive and National Audiovisual Institute. We can also listen to interviews with representatives from Ministry of Culture and many directors of culture institutions who speaks about digitalization of museum, audiovisual and photographic exhibits.

It is worth to investigate the subject and find out how difficult and time-consuming can be digitalization of culture; how many intermediate elements are connected with it.

The First Polish conference SparkUp 2010 about web design and web development was held 25th of May 2010 in Poznań. The Conference Program was divided into two separated paths – UX/Web Design and Web Development.

The First path, more theoretical and visionary, was about techniques and technologies in the context of creating usability of user interfaces. There were two excellent speakers in the subject – Andy Budd from Clearleft Ltd and Marek Kasperski from ThinkLab, co-author of book „Projektowanie stron www. Użyteczność w praktyce”. Listening to Marek lecture I have noticed a few things which would be very useful to implement in web applications of dMuseion and dLibra.
Next speakers showed the subject from a more technical point of view – there was a Remy Sharp (from LeftLogic), who had two presentations about jQuery (in that path from more a web designer approach) and Inayaili de León, excellent web designer, who spoke about bad practices in CSS.
For dessert we could listen to Antony Ribot (half-french,half-english and half-polish fellow) who talked about his experiences in designing UI for mobile solutions – which, for me, was surprising because of differences from normal web design.

The Second path, addressed more to programmers, started the official web evangelist of Opera Software – Bruce Lawson, who by the presentation „Web Development 2.0”, in very interesting and funny way, showed new approaches and perspectives of web development with the HTML 5 and the CSS3. Among other speakers were: already mentioned Remy Sharp, who presented more cool and advanced features of jQuery in lecture „jQuery: write less do more”, Bartek Zass from Microsoft who talked about Silverlight and Matt Biddulph from Nokia, who fascinated listeners with solutions of modern mobile phones.
One of the lectures was presented by Piotr Czekała from INSYS (responsible for organization of the conference) about the optimization techniques of frontend, which reminded programmers about the duty to reduce number of HTTP requests, compression of image data and optimization of frontend scripts. It was second thing mentioned on the conference, which we are planning to investigate and possibly implement in the web application of dLibra and dMuseion.

Although I have noticed the absence of one big gamer – Adobe (with Flash and possibly Flex), in the end I left the conference quite pleased, with a feeling of time well spent. Place of the conference – Congress-Teaching Center of Medical University was great as well as the food, after party and all.
Judging from a number of participants, SparkUp was successful and we can expect next one in 2011 – this time, two days perhaps.

Not so long ago information about the critical security flaw discovery in the Java Runtime Environment (JRE) spread across the world. Flaw which gives the possibility to run any code (malicious as well) through Java Web Start component.

For instance the error could occur during execution of a Java applet at any HTML web page. The problem was that there was no validation mechanism for command-line parameters used with the „javaws.exe” command, which was internally executed, so that it was possible to run any code (with user rights) through properly prepared HTML code.
The flaw concerned especially the Windows system family but probably it was possible to prepare attack on Linux systems as well.

It would be difficult to call the Oracle`s initial reaction as responsible – despite the reported attacks, patch was not prepared immediately. However , thanks mainly to disclosure actions of Google`s security researcher Tavis Ormandy, company decided to release (with a short delay) Update 20 of JRE, which eventually fixed the bug. Proposed by Ormandy way to execute unwanted code was after the update unsuccessful. Independently from Ormandy other security researcher – Ruben Santamarta proposed his solution of attack, which code of proof-of-concept can be checked on page: http://www.exploit-db.com/download/12122.

Eventually dangerous code was repaired and thanks to new JRE upgrade it should be safe to use Java Web Start Framework, which is widely known and often used standard – also dLibra software uses it, e.g. when running administrator/editor application from reader application.
For those who have not yet installed new JRE upgrade we give the advice to do so.

The family of Java technology grows stronger in the field of internet multimedia solutions. This refers to the JavaFX – a new programming platform, which offers many interesting features, broad applicability and in particular good support for Rich Internet Applications (RIA).

Until recently, the leading provider of RIA`s multimedia technologies was Adobe and its Flash technologies. In 2006 Microsoft proposed a new solution – Silverlight and then in may 2007 Sun Microsystems (now Oracle) announced its first competetive solution based on Java technology. In this way, the world first heard about JavaFX.

From developer point of view the JavaFX is simply a new scripting language, in which programming multimedia and graphics is much easier. In practice it means that, fully integrated with Java, JavaFX gives the ability to improve standard applications with new attractive multimedia solutions – images, animations, movies etc. Although competitors offers pretty much the same, the main advantage of JavaFX is its broad applicability – it can be used to implement RIAs as well as standard desktop applications, mobile applications, games, graphics presentations and multimedia presentations on TV platforms.