Between 16th and 18th February 2010 in Veria Central Public Library (Βέροια – city located in Middle Macedonia region in Greece) a training for ACCESS IT project was conducted. The training led by Adam Dudczak and Marcina Werla from PSNC DL Team covered wide range of topics related to digitisation, creation of digital libraries and aggregation of metadata for Europeana and other purposes. The training was divided into following sections:

The training had 15 participants representing Greece, Serbia and Turkey. 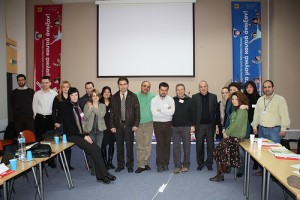 In the ACCESS IT project these persons will create in their countries centres of competence on digital libraries, trying to cause the increase of the amount of cultural heritage available on-line and visible in Europeana. On the basis of materials prepared for the training and conclusions from discussions and practical exercises an on-line course will be prepared. It will be the basis for wide training action for cultural institution employees in three mentioned countries. This training connected with certification is planned to reach to several thousands of people causing the increase of knowledge and practical skills in the digital libraries area.

The training was described by regional press (1, 2, 3) and on the Flickr profile of the Veria Central Public Library some photos from the training were published.

Veria Central Public Library is one of the largest public libraries in Greece. It takes many initiatives related to European cooperation and to the promotion of reading. Particularly worth to notice and recommend is the idea of Magic Boxes – a way to arrange the library space for the youngest readers, which was implemented in Veria Central Public Library at the end of 2008.